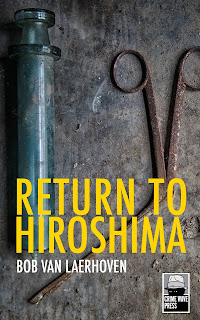 Return To Hiroshima by Bob Van Laerhoven
First published in Dutch as Terug naar Hiroshima by Uitgeverij Houtekiet in the Netherlands in April 2010. English language edition published in Hong Kong by Crime Wave Press in March 2018.

Where to buy this book:


Add Return To Hiroshima to your Goodreads

1995, Japan struggles with a severe economic crisis. Fate brings a number of people together in Hiroshima in a confrontation with dramatic consequences.

Xavier Douterloigne, the son of a Belgian diplomat, returns to the city, where he spent his youth, to come to terms with the death of his sister. Inspector Takeda finds a deformed baby lying dead at the foot of the Peace Monument, a reminder of Hiroshima's war history. A Yakuza-lord, rumored to be the incarnation of the Japanese demon Rokurobei, mercilessly defends his criminal empire against his daughter Mitsuko, whom he considers insane. And the punk author Reizo, obsessed by the ultra-nationalistic ideals of his literary idol Mishima, recoils at nothing to write the novel that will "overturn Japan's foundations"....

Hiroshima’s indelible war-past simmers in the background of this ultra-noir novel. Clandestine experiments conducted by Japanese Secret Service Unit 731 during WWII leave a sinister stain on the reputation of the imperial family and Japanese society as a whole. 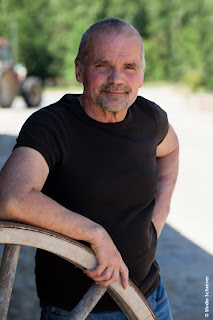 Bob van Laerhoven was born on August 8th 1953 in the sandy soil of Antwerp's Kempen, a region in Flanders (Belgium), bordering to The Netherlands, where according to the cliché 'pig-headed clodhoppers' live. This perhaps explains why he started to write stories at a particularly young age. A number of his stories were published in English, French, German, Spanish and Slovenian.